I don’t know if you’re willing to entertain the thought, but much of this is not merely a contingent social phenomenon blowing progressivism off course; rather, it is the necessary outworking of expansive liberalism, as its only possible destination once it stands alone as a moral framework. Liberalism as a vision of the human good cannot exist as its own foundation; it becomes precisely the opposite once is passes from a purely procedural or epistemic limitation (in order to seek and attain the moral truth, we must allow differences of opinion to thrive in the public square, even protecting the marginalized voice) to a strong or ontological statement (the only allowable moral truth or human good is difference and individual assertion itself, to be secured by progressively identifying and demolishing any other source of authority).

Yes, the new language and abstract individual rights brought in by liberalism in its earlier forms was genuinely freeing and helped to eradicate major injustices — but that was only possible when it still operated against the backdrop of a prior set of shared, thick moral coordinates that were not stated purely in the negative. It was the corrective of a dietary supplement that could, in the proper dosage, unsettle the harms caused by a diet moving out of balance. But that same supplement on its own, if it becomes the only basis of nutrition, is nothing short of a poison to the human or social body. For a much better recent statement of this analysis, I strongly recommend Alastair Roberts, one of the more perceptive bloggers in this space:

The Failing Dam of Liberal Society

“Liberalism undermines itself as it absolutizes its principles and fails to protect and preserve the social foundation upon which it is built. The radicalization of liberalism takes different forms on different sides of the political aisle (both of which tend to be liberal in differing ways). For those on the right, it can take the form of the absolutization of free speech, individual autonomy, and the free market. For those on the left, it can take the form of the radicalization of gender neutrality and the atomizing forces of the Sexual Revolution, the dismissal of given identities and the duties that accompany them, resistance to borders and support of mass immigration, and opposition to the traditions, authorities, symbols, and sacred values by which particular peoples are forged and united.”

If you want to raise up the mythical individual self as the only foundation— always over the next horizon of a new repression waiting to be cast off, so that we can finally grasp the elusive transcendent subject in its true form — you are asking for the police state you describe above, in which everyone joins in the task of outdoing one another in the attempt to cross the next boundary and eviscerate those who still hold to the prior set of barriers now transcended. It is a deeply inhumane vision and, once again, an all out class warfare waged by the advantaged — and the generally young, urban, and childless — against the rest of humanity, those who look nothing like a contextless and expressively autonomous self, and who cannot be abstracted from thick commitments, unchosen identities, binding social norms, and other perfectly ordinary aspects of being a situated person that are the core of every anthropological context yet to be seen on Earth outside of this tiny historical island of late individualist capitalism.

– MyOtherAccount commenting on an essay by freddie deboer

Icke confirmed to Andrew Neil in May 2016 that he believes the British Royal Family are shapeshifting lizards.[12] He identified the Queen Mother in 2001 as “seriously reptilian”,[85] and said he had seen Ted Heath’s eyes turn black while the two waited for a Sky News interview in 1989.[141][107] Lewis and Kahn argue that Icke is using allegory to depict the alien, and alienating, nature of global capitalism.[142] Icke has said he is not using allegory.[143]

Climate change is going to move a bunch of arable land out of a bunch of third world African countries, whose populations are exploding and who barely manage to feed themselves as it is. When those trends continue for 30 years, we are going to see one of the following: (1) mass starvation, (2) mass migration into the first world, or (3) western nations stepping in and setting up food distribution networks. The first will be morally intolerable, the second will be politically unthinkable, and the third will entail stabilizing the countries and effectively taking over their governments, or setting up a parallel government to secure the distribution networks. It’s this third option that will be de facto colonialism, although I’m sure people will tiptoe very carefully around that word in describing it.

On 14 December 1967 the government passed the Neuwirth Act on contraception at its first reading. Although not yet paid for by social security, the pill would now be freely available in pharmacies. It was this which offered a whole section of society access to the sexual revolution, which until then had been reserved for professionals, artists and senior management—and some small businessmen. It is interesting to note that the “sexual revolution” was sometimes portrayed as a communal utopia, whereas in fact it was simply another stage in the historical rise of individualism. As the lovely word “household” suggests, the couple and the family would be the last bastion of primitive communism in liberal society. The sexual revolution was to destroy these intermediary communities, the last to separate the individual from the market. The destruction continues to this day.

Children existed solely to inherit a man’s trade, his moral code and his property. This was taken for granted among the aristocracy, but merchants, craftsmen and peasants also bought into the idea, so it became the norm at every level of society. That’s all gone now: I work for someone else, I rent my apartment from someone else, there’s nothing for my son to inherit. I have no craft to teach him, I haven’t a clue what he might do when he’s older. By the time he grows up, the rules I lived by will have no value—he will live in another universe. If a man accepts the fact that everything must change, then he accepts that life is reduced to nothing more than the sum of his own experience; past and future generations mean nothing to him. That’s how we live now. For a man to bring a child into the world now is meaningless. 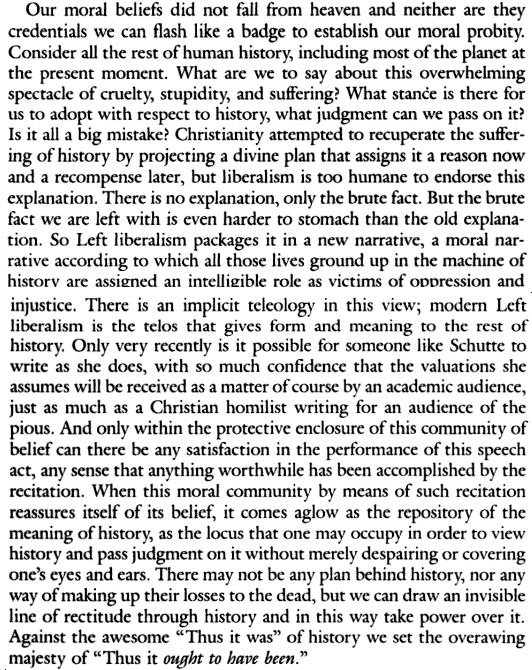 “ideology is a parasite on religious substructures.”